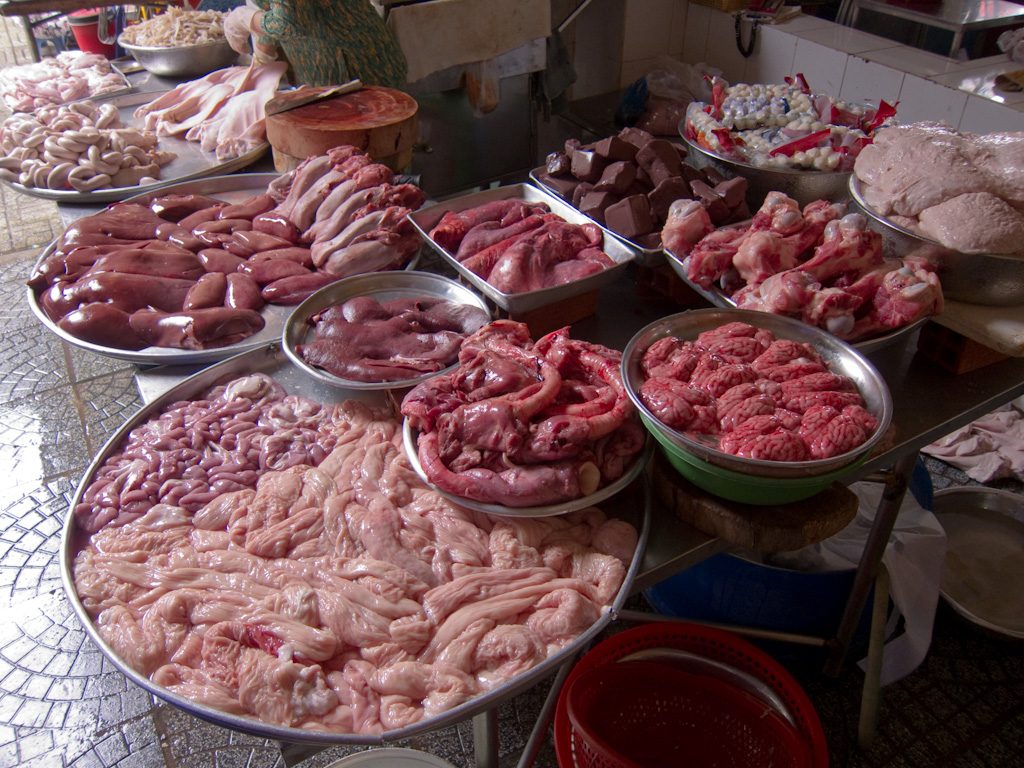 What do you usually see behind the glass display at your neighborhood’s butcher shop?

Most likely, line after line of muscle meat cuts fill the space of the refrigerator.

With their aristocratic pride, lie some beautiful cuts of rib eye, New York steaks, filet mignon, and maybe some lamb or pork chops. Some less prestigious cuts, like chuck roast or brisket, will also be represented.

Surly, you’ll find the ever-present and ever-boring, the chicken breast. Ground beef, usually on the leaner side, is there, too.

Most of these cuts are from the muscle tissue of the animals. But where are the other parts of the animal? The fat, tendons, and bones, and even more important – where are the inner organs (offal, as they are called)? Liver, kidneys, heart, brain, sweetbread, and blood (that’s an organ, too) are some of them.

If you insist and the butcher has had a good day, he’ll bring you some liver from the back of the shop. If you want to get some weird looks, ask for some kidneys or brian.

When Offal Wasn’t a Buzz Word

Eating these parts of the animal has recently become a niche movement of nose-to-tail eating, but largely, eating beef liver or lamb’s brain is still considered fringe.

In the past, though, these parts were central to the diet of our ancestors, the hunter-gatherers.

Obviously, our ancestors didn’t have measurement tools to know the tremendous nutritional value of these organs, but what they did have were very strong instincts and millions of years of trial and error and evolutionary wisdom.

Surely, economics played a central roll as well. Hunter-gatherers didn’t have the luxury of choosing between the fillet and the rib. Scarcity and constant lack of certainty regarding where and when the next meal will come from, didn’t allow any selectiveness. Whatever was available to eat and didn’t look or smell like it was not going to kill you, was legitimate food.

When it comes to inner organs, some societies valued them even more than the muscle meat cuts and considered them a delicacy.

If you follow the TV show of chef and food writer Anthony Bourdain, you’ll remember an unforgettable episode where he joins a family of Inuits for dinner after a successful seal hunt. The Inuit people of the arctic regions are one of the few population groups that still live, partially at least, like hunter-gatherers. (In their case, they’re mostly hunters.)

The scene that looks like it was taken from an especially gory movie, shows the fresh hunt of the day, the seal, wide open on the kitchen floor, guts spilled out and blood all over. For the family, it’s a feast. Every part of the animal is consumed. The inner organs are eaten like a precious delicacy – raw. As an act of generosity to an honored guest, Bourdain is offered the eyeball of the seal. In the harsh weather conditions of the arctic, these fatty, gelatinous organs are nutritional treasures.

In other parts of the world, organ meats get the same respect. African mothers in traditional societies will give their babies raw liver after they have thoroughly chewed it for them.

Even in the animal kingdom, we see a similar approach; some predators will eat the organ meat of their prey first and only then move on to the muscle tissue if at all. (1)

Why You Should Start Eating Organ Meats Today!

Today, science can explain the strong instinct our ancestors and even animals have had about organ meats. Let’s look at some of the nutritional values they have:

The abstention from organ meats is a new phenomena in our society. It is also typical in America more than any place I visited, including the Middle East, which is where I come from.

In places like China or Southeast Asia, organ meats of all kinds of animals are proudly displayed in meat markets. The European culinary tradition in places like France, Spain, and Italy is rich with dishes of organ meats and even blood. Almost every culinary tradition has its version of blood sausage. Blood is also used for soups and even pancakes.

In Israel, a popular street food is something called Jerusalem Mix, which is fresh pita bread filled with grilled organ meats, like chicken hearts and livers.

Even here in the U.S., organ meats were served regularly, but that changed sometime at the beginning of the last century when fat and cholesterol became demonized. Another reason was (and still today) the belief that organ meats, like liver, store toxins. It is important to mention that liver indeed neutralizes toxins but does not store these toxins. (3)

Convenience and our need to detach ourselves from the sources of our foods, especially meat, must have also played a central roll in this trend.

The use of bones and connective tissues in practices like making bone broth has also disappeared from the American kitchen. In her excellent recent book, Nourishing Broth, Sally Fallon writes about how the traditional way of accomplish joint health was eating gelatin-rich homemade bone broth and plenty of collagen-rich foods, like chicken feet. Today, most people in the Western world subsist on collagen-poor diets and rely on drugs for joint health that many times cause more harm than healing. (4) 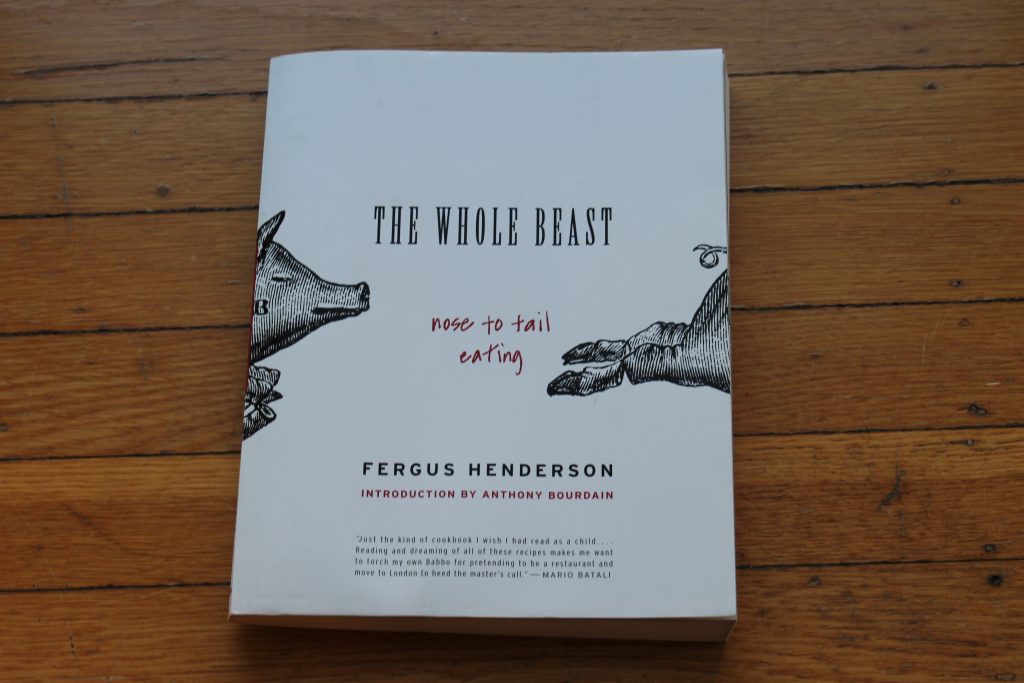 Today, the concept of nose-to-tail eating is something all of us paleo enthusiasts like to talk about, but more than 20 years ago, in October 1994, years before the paleo movement even started and before liver and bone broth became a trend, Fergus Henderson, an English chef, opened St. John Restaurant in London.

His concept was to pay respect to all parts of the animal, and in the menu were items like dried salted pig’s liver, deep fried lamb’s brain, and roasted bone marrow with parsley salad, which became a classic.

In 2014, when the restaurant celebrated its 20-year anniversary, Henderson wrote in The Guardian:

“Eating well is a pleasure, and it would be weird not to eat well within nature’s restrictions: short, rigorous British seasons administering good things from the earth, air and sea and flesh beyond a fillet. This is common sense. My intention was never to cry ‘Woo hoo! Blood and guts!’ It was merely to celebrate the wonderful textures and flavors of insides and extremities because that’s what I like to eat. Nature writes our menu, and we should listen.

“A fillet is all very well, but look beyond. There are shanks, feet, glands … things to enjoy slow and unctuous, or quick and tender … tripe to soothe and uplift. It is beyond me why these things fell from fashion in our isles.” (5)

The cookbook, The Whole Beast – Nose to Tail, that came out of that restaurant became a classic among chefs and cooks and is largely responsible for the nose-to-tail movement that followed.

Henderson likes to point out that we have drifted too far from the sources of our food supply. In the supermarket aisles, we see round, pink patties of ground meat that show no resemblance to the animal they came from. Maybe it’s easier for us to forget the real story of our meat, a story that is bloody and brutal, no doubt.

One of Michael Pollan’s strongest messages in his books and articles is to suggest that we should open our eyes to the full reality of where our meat comes from and how it got to our dinner plate.

The animal that we eat allows our bodies and minds to thrive, and each part of the animal deserves our respect. We have thousands of years of culinary wisdom that can teach us how to pay respect to all those parts and how to treat and eat them. Would it be a stretch to say that this is our moral obligation? I don’t think so.