Kettlebells – The Return of the Gluteus Maximus

For most of my life, I’ve been exercising or practicing some form of sport. I was a competitive swimmer in my teens. After giving up on becoming a serious professional swimmer, I entered the gym, pulling and pushing iron for hours every day.

Running was always a default activity. Later on in my life, I also added yoga to my routine.

At the age of 39, I thought I was pretty fit and strong. But around that time, I began to notice that body was acting differently than usual.

And then the spasms started, mostly in my lower back. I would pull, push, or lift some object, and that was it for the next three days.

The sharp pain would put me in a total non-active mode. Visits to my chiropractor became more frequent as well.

The feeling that something is wrong started creeping to my awareness–a realization that my body is actually weak. And this weakness manifested itself, not in the swimming pool or on the yoga mat, but in trivial, day-to-day activities.

I knew I needed to make a radical change in my physical practice. I started making some research and got more and more familiar with the concept of “core” in regard to body strength and its profound significance to our body’s well-being.

From Russia With Love 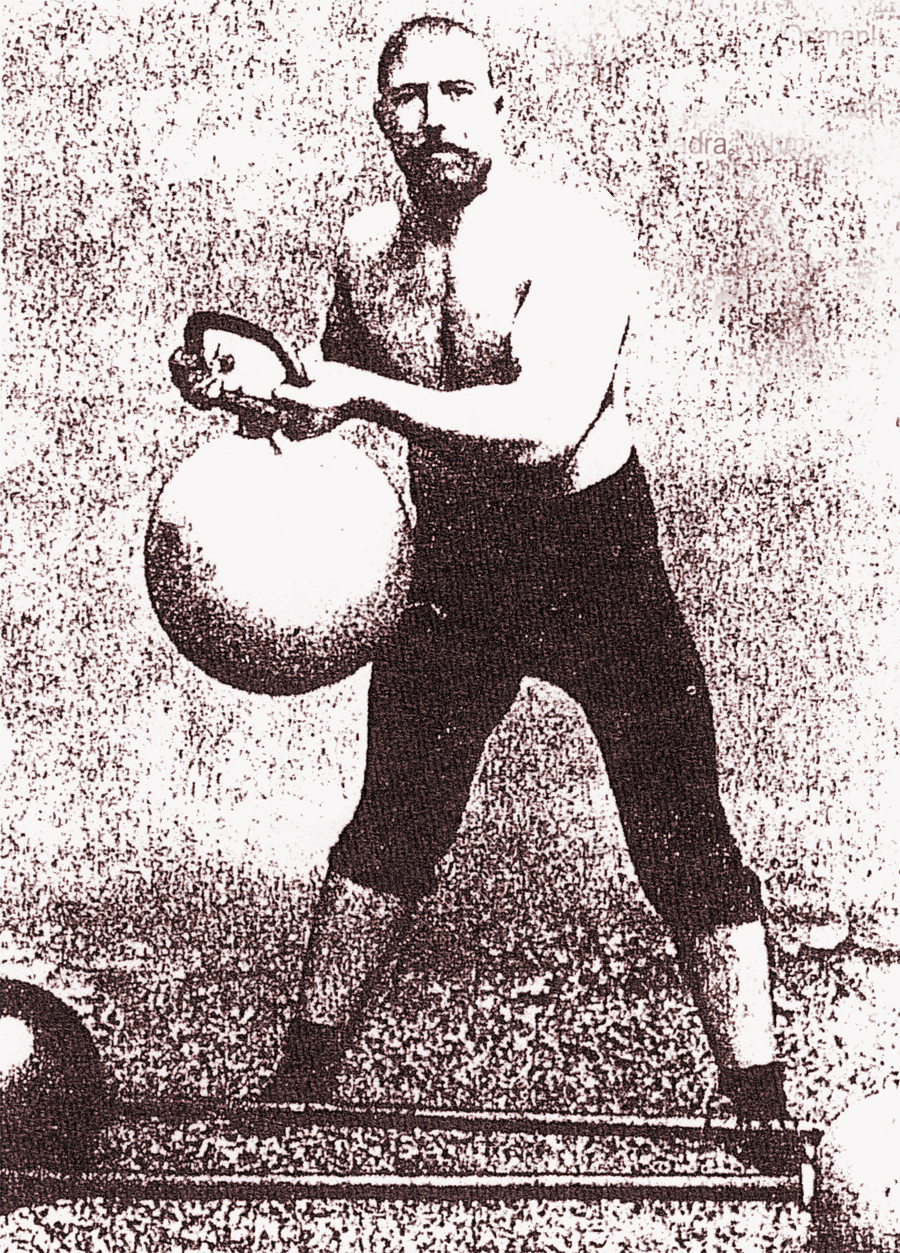 Up until that point, kettlebells for me were those weird-looking ball-shaped weights at the gym.

After doing more research, I discovered that kettlebells go back millennia, to the time of ancient Greece, and became most popular in Russia in the eighteenth century.

Kettlebells were first used as weights to measure goods and grains, but vendors in fairs started swinging them to show their strength and reinvented them as a training tool.

Later, the kettlebells established their place in official weightlifting training programs thanks to a Russian doctor named Vladislav Kraevsky but remained popular only in the borders of the former Soviet Union. They also became a training tool being used by the special forces of the Soviet army.

Fast forward to our time, the name Pavel Tsatsouline has to be mentioned. A former Soviet special forces trainer who introduced the kettlebells in America in the ’90s.

Tsatsouline, or “Pavel”, as the trainer’s tribe like to call him, established the RKC (Russian Kettlebell Certification), collaborating with Dragon Door, the first U.S. company to manufacture the Russian kettlebells.

So I found an RKC instructor in my area and started training. At my first class, my suspicion that I’m weak was painfully confirmed.

The impact of the ballistic movement of a humble thirty-five-pound kettlebell put my body in a state of shock. Trying to do the basic swinging movement, my body totally lost control and stability. I was not swinging the kettlebell. It was swinging me.

The next thing I noticed was my heart racing after only a few seconds of swinging.

My instructor kept insisting that I engage my belly and my gluteus maximus muscles, known as the “glutes,” at the end of every swing.

At that point, I didn’t know that my glute muscles were going to play a central role in the next classes to come, especially in their unwillingness to cooperate with me.

The work with the kettlebells, I realized, exposed years of negligence and dysfunction of those two strategic muscles, a dysfunction that many of us in the Western world have that can be attributed to our nasty habit of sitting in chairs for hours every day from early childhood.

My glutes were so numb that it took my nerves five or six sessions to start firing and activating them. At that point, I started liking those iron balls. 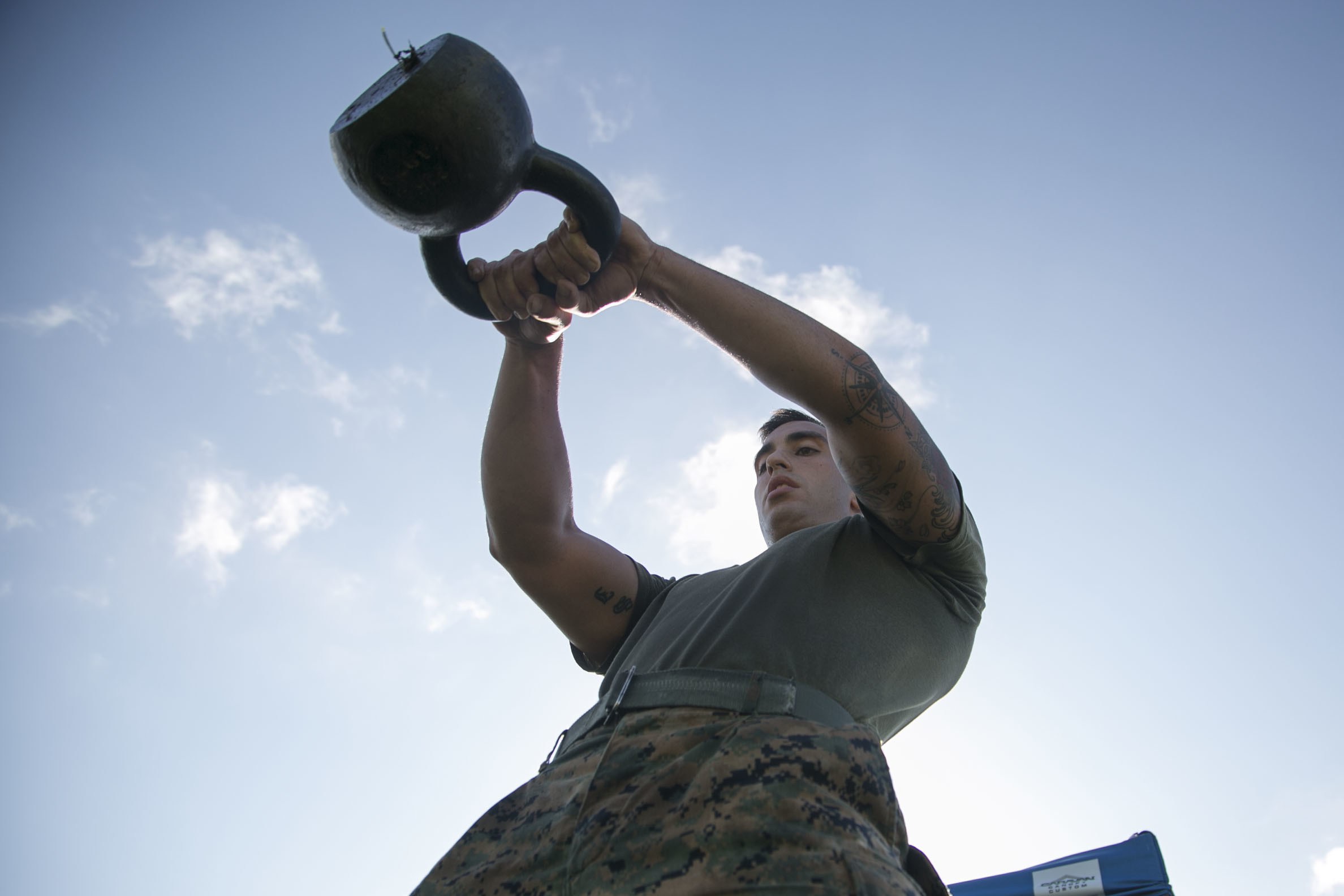 The Science Behind The Kettlebell

The kettlebells movements are multi-joint movements that require full-body integration and core stabilization.

The principle of the work is using submaximal load, performing many repetitions over an extended period of time, and thus creating a workout that is both cardiovascular and musculoskeletal. Studies have shown that the kettlebell can improve strength, power, explosiveness, and endurance.

Kettlebells are simple, but they can be used in a surprising variety of ways.

By adding more load, swinging with two kettlebells instead of one, and lowering the number of repetitions, you get more strength-improving benefits.

Some of the benefits of kettlebells training are:

The Minimalist Approach (Or – no more excuses for not training)

Progressing with my training, I learned how to perform the other basic movement of the kettlebells, the clean jerk, and the snatch. I also purchased two thirty-five-pound Russian kettlebells and started training at home.

The improvement was amazing. The movements became smoother and more controlled. I felt like I was able to tame this wild animal that was swinging between my legs and over my head.

More important was the feeling of my day-to-day life. I felt stronger. My walk and stance became more stable. My posture more erect. The kettlebell awakened my sense of gravity center.

The elusive sense of core, a terribly over-used and misused term, was finally awakened after years of absence.

Don’t get me wrong. The kettlebell is not a magic workout. For example, for serious strengthening, there is no way around some lifting heavy bar weights in controlled slow movement, but I found the kettlebell to be the ideal gateway into the versatile world of high-intensity training.

And let’s remember another huge advantage the kettlebell has – it’s a gym in the form of two round iron balls. If you’re like me and you like the minimalist approach to training, then the kettlebells are for you. A few basic movements and you have a total body workout. No need to waste hours in the gym or at the traffic jam on the way to the gym.

Two kettlebells and your bedroom are all you need.

The minimalism here applies to the time aspect too. If you do it properly, a kettlebell training session shouldn’t last more than twenty to twenty-five minutes. If it does, you’re probably overdoing it.

The ballistic impact of the load creates an amazingly concentrated and efficient workout. This is the ideal training for busy people, and it will eliminate any claim of yours for not having time to work out.

Many people reach the point in their lives where they feel that the good old run or swim do not benefit them as much as they need.

In other cases, they even experience more frequent injuries as a result of these activities. They know that they need to incorporate some form of intensity training into their routine.

The beneficial aspects of such training are huge if you’re over forty and start to feel the impact of your age – especially a loss of muscle and bone tissue. The kettlebell is a great way in.

We use cookies to ensure that we give you the best experience on our website. If you continue to use this site we will assume that you are happy with it.OkPrivacy policy